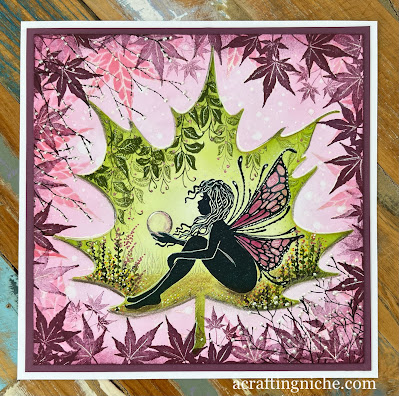 Today I received an order from Sweet Poppy Stencils, as I could not resist some of their new release products! It would have been rude not to have an immediate play, so I made this card.

I have used two shades of green Lavinia Elements Inks (Lime Punch and Olive) for the background of the maple leaf which is a Sweet Poppy Stencil SP6-125ML.  Around the edge of the leaf, I have used "Confetti" Elements ink.  While I had the "confetti" ink out, I used another Sweet Poppy Stencil, which is a small maple leaf, adding the detail around the edge of the card.

I then turned to stamping the leaf area.  I used Lavinia Stamps "Bron" the fairy as the main feature.  I also used the following Lavinia Stamps: Small Branch, Gyp, Bubbles, Berry Leaves and Foliage Set.  All stamped in Verafine Clair Inks.

I further stamped the Lavinia Stamps "Maple Leaf" and their "Mini Maple Leaf" around the edge of the card in Versafine Clair "Chianti".  Finally using Liquid Pearls, Posca Pens and gel pens to add extra detail.