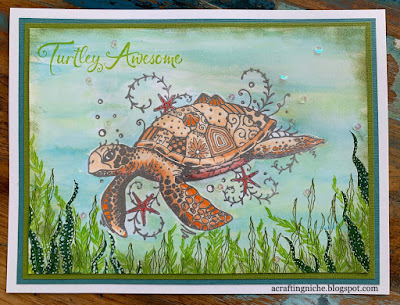 Today I have played with a stamp by a manufacturer that I have not used before "Pink Ink Designs".  I was slightly out of my comfort zone as this is a large stamp and I prefer to work with a smaller scale.

Having said that, the plate of stamps were a pleasure to use.  For this card, I have used their "Sea Turtle (PI019)" which is part of their "Nautical Series". 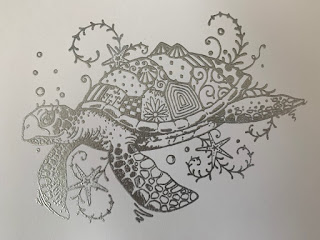 I started by using stamping the turtle image with  Wow! Embossing Ink Pad (I used the "Clear, ultra slow drying" one) and Wow! powder.  I used the Super Fine Metallic Silver shade.  I then heated the stamped image with the heat gun to create a raised outline image. 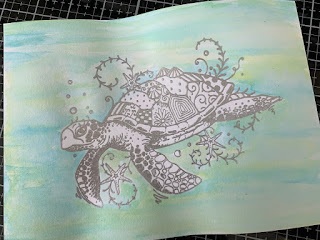 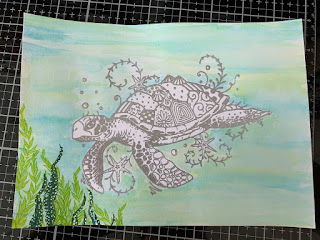 Once the background was try and flattened, it gets a little distorted in shape due to the wet surface.  I moved on to stamp the weeds.  I used two shades of Versafine Clair Inks (Verdant and Shady Lane), I also used a Distress Oxide Ink in the shade of "Peeled Paint".

I coloured the weeds and the turtle image in using Arteza Brush Pens, they are beautifully soft to use, very much like using a brush rather than a felt pen.

Finally, I added some white high-lighted areas using a Signo Pen and adhered some Nuvo sequins in the shade of "Diamond" to replicate air bubbles.