Lavinia Stamps "Maka the wolf"" and the owl card 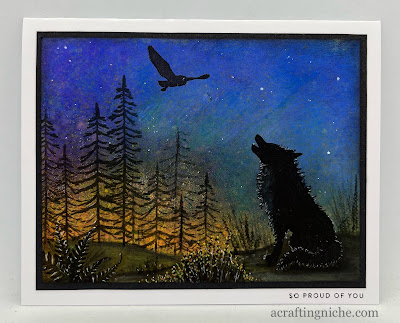 I don't usually make cards for other people.  I don't like the pressure it puts me under and there is obviously the fear of disappointment that I've not made what they wanted.

Last night I received a message asking if I could make a wolf card for a special occasion in a month.  I reluctantly agreed.  As I was up early this morning, I decided to make the card, so it was done and out of the way, instead of me spending time fretting about it.  This is the card I made.

I used a spray ink Dylusion spray ink background from my stash that I had made some months previously. I used my Van Goch Pastel Pencils to add a bit more colour to a few areas too.

I used Versafine Clair "Nocturne" black ink with an assortment of Lavinia Stamps, including "Maka the wolf", Woodland Fern, The Red Pines and Foliage Set. I also used Gel and Posca Pens for colour and highlights.