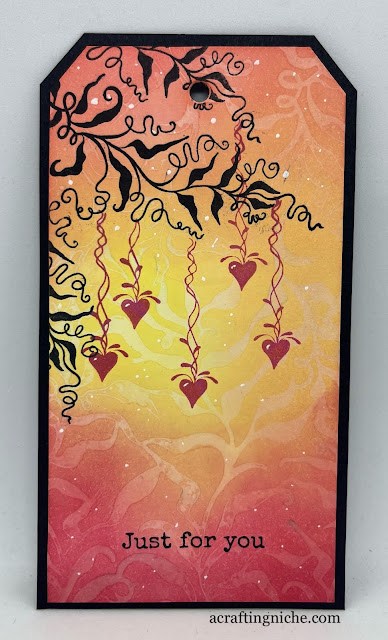 I'm playing catch up with my tags, as I've been away in the caravan this weekend, so this is the first of three that I need to make to be back on track.

I spritzed the surface of a Lavinia Stamps stencil called "Foliage" with water, then lay it wet side down, over the tag.  I used a kitchen towel to absorb any surplus water then lifted the stencil, which reveals a bleached look image of the stencil. I then used a heat gun to dry the surface.

Once dry, I stamped the sentiment, by Lavinia Stamps, called "Heartfelt Verse" in Versafine Clair "Nocturne" black ink.  I used the same ink to stamp the Lavinia Stamps "Wild Vines" too.

Next, I stamped the hanging hearts, which are part of the Lavinia Stamps "Fairy Charms" stamp set, using Versafine Clair "Glamorous" pink ink.  I then added small white dots on the surface of the background and highlighting areas on the hanging hearts.