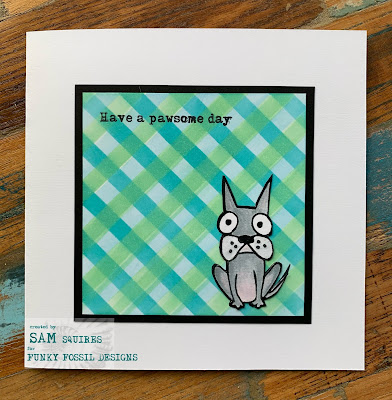 Today I've been playing with the Funky Fossil "Simply Stripes" stencil, which I often over look, opting for a more decorative design.

I used an off-cut of white card in the size of 9.5cm (3 3/4") square. Positioned the stencil on the diagonal ensuring that corners were included, then used some low tack tape to hold the stencil in position. 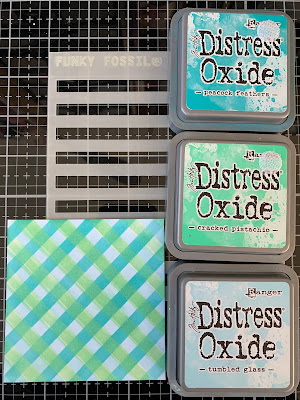 I lifted the stencil and rotated the card a quarter (as I like to work in the same direction), repositioning the stencil with tape to secure.  I then used "Peacock Feathers" Distress Oxide Ink using the same technique used previously.  Once the tape and stencil are removed you can see the finished background grid, which I think is really pretty as they're some of my favourite colours.

I then mounted the background onto a piece of black paper and trimmed to size.

I then moved on to the stamping using Versafine Clair "Nocturne" black ink with the Funky Fossil "Furry Friends" stamp set.  I stamped the sentiment and then thedog on the bottom right corner, stamping the same dog image on a small piece of card.

Using the small piece of card, I coloured the dog image by using two shades of Distress Oxide Inks (Spun Sugar and Weathered Wood), applied with a paint brush.  I then cut out the image and adhered it over the stamped image on the card. Finally sticking the topper to a white 6x6" card blank.

P.S. after I had taken the photograph, I decided to add Glossy Accents to the eyes and nose, just to give a bit of dimension.