Fern and Text with a Funky Fossil Stencil Tag 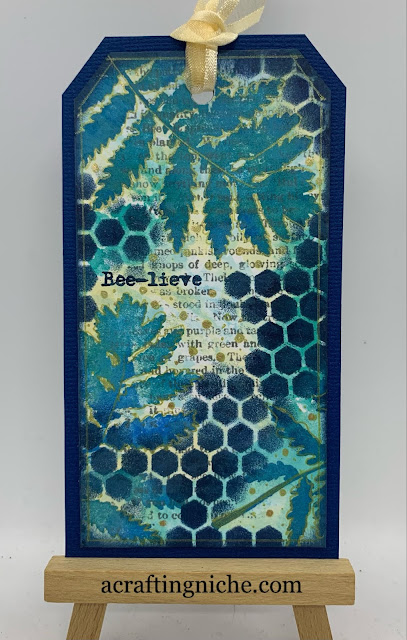 I've been sorting through some of my crafting stash today.  I have quite a lot and some doesn't get used, mainly because my crafting style has changed over the years, so I've been putting bits by to re-home at a later date.

While sorting, I came across a small off-cut of a Distress Oxide ink background, which was just big enough to make a tag out of, so I decided to create something with it, rather than it being thrown back into the "background box" again.

One of the stamps I came across was a "Text Background Stamp - CL-05088" by "JustRite Cling" , so I decided to try it out over the background using Versafine Clair "Morning Mist" grey ink.

Another stamp I came across, which was purchased as part of a bundle, was a fern leaf called "Water Colour Fern - 855" by purplenecker.com. I used two shades of Versafine Clair ink to stamp the ferns "Warm Breeze" and Paradise" both tones of blue colour.

Using Versafine Clair "Twilight" dark blue ink, through a Funky Fossil stencil called "Make Your mark III" I added the honeycomb detail and also the sentiment which is part of their "Bees Geometric" stamp set.

Finally, I added a gold line border a fraction in from the edge of the tag and added some little polka dots to the text area.