Please pop over to the challenge blog and take a look at all the other fab makes by my fellow Design Team members and maybe you could take part too.  it's an "Anything Goes" challenge so you can enter any crafts you make. 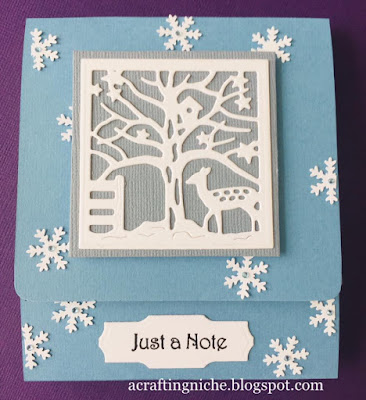 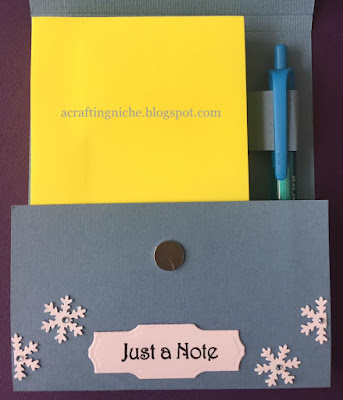 My friend was telling me about her children wanting to give their teachers a gift and how expensive it can be, which got me thinking what I would give in that situation, coming up with this little pad and pen set.

I started by buying a cheap pack of short pens and post-it notes, I think the pack of pens were about 70p from Home Bargains.  I already had the Post-it pad in my stash.  I measured the pens then marked and scored card at the appropriate places.  I used a corner rounder to tidy the corners of the flap. Here's a photo of my measurements:

Once scored and cut to size, I then cut a strip of the card and loosely wrapped it around the pen and then glued the two ends together. 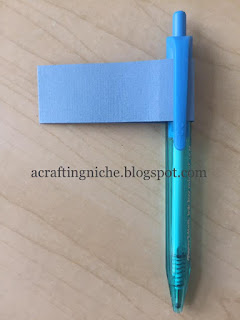 I then positioned it on the card base and added double sided sticky tape to secure it into position. 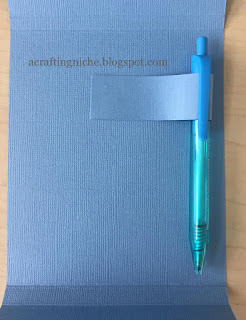 I glued the Post-it note alongside the pen.  I then stuck on a + and - sticky backed magnet snap for the closure.  I used ones I had in my stash by BasicGrey. 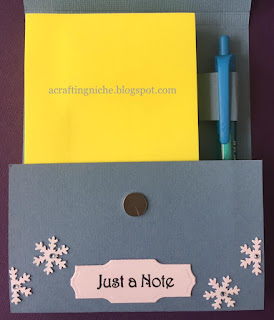 It then decorated the front. I started by stamping the sentiment.  I used a stamp by Rubbadubbado, the sentiment was stamped in Versafine "Black Onyx", which I die cut using Spellbinders "Victorian Tags".  I then stuck it to the central lower section of the front.  Using an Xcut punch, I cut snowflakes and glued them to the surface.

To make the main image, I used a Spellbinder's die set called "Four Seasons Silhouettes".  Using the winter die, I cut the image.  I then mounted it onto grey card and cut to size.  Using foam pads, I glued the image to the top flap section of the front cover.  Finally, I added some tiny self adhesive gems to the middle of the snowflakes. 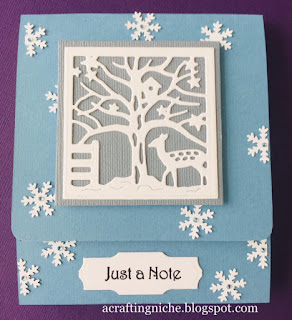