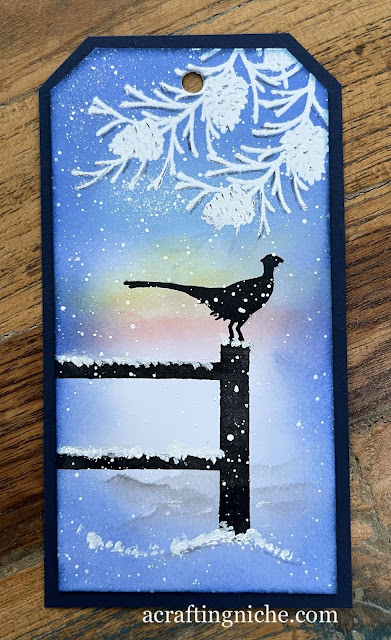 It's hard to believe that I have made a whole week of tags, part of Karen Telfer's "24 Days of Tags 2022" challenge.  If you would like to take part, here is her tutorial fon her Facebook Group.

I've more or less followed Karen's instructions to the tee.  I added an extra embossed "Fir Cone Branch" and added snow laying on top of the fence posts. I also decided to leave out the snowflakes.  I liked it as it is.

The stamps used are by Lavinia Stamps, using their "Pheasant" and "Fir Cone Branch" stamps. The pheasant was stamped in Versafine Clair "Nocturne" black ink.

For the embossing I used the Wow! Clear embossing ink pad, Wow! White Embossing Powder and an antistatic bag.

For the snow, I used Dr Ph. Martin's paint to splatter and paint the snow on the fence post.

It's interesting when following the tutorial of somebody else, as sometimes, I find myself saying to myself that "I would do it this way"! and working against my natural grain sometimes seems very strange.  An example of this was stamping/embossing the fir cone branch.  If it were me, I would have used clear embossing powder and stamped and embossed first thing, before any ink hit the page.  So I guess what I am saying is that we all work in different ways, some may work better than others, but we all get to the same destination in the end.