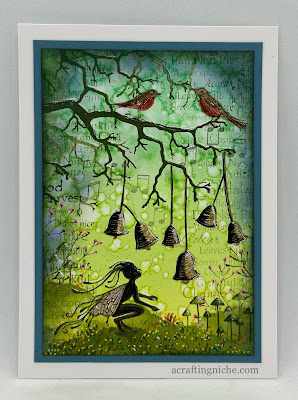 This afternoon I've made another card.  This one didn't flow as I was making it.  At one stage it was very close to going in the bin, so I walked away from it.  Leaving it for over six hours.

I started with a gel plate background made by brayering two Elements inks (Bleu Atoll and Greensleeves) on to the surface of the gel plate, adding splatters of water with a fan paint brush to achieve bleached areas, then taking a press.

Once dry, I started stamping.  I've used too many shades of Versafine Clair to mention and to be honest I don't recall the order I stamped in, other than the branch, Nia, the birds and bells, then I think the text, the music notes.  Here's a list of the Lavinia Stamps I used:

Other than Versafine Clair inks for stamping, I used Blue Print Sketch Distress Oxide Ink around the edges.  I used Derwent Inktense water colour pencils for colouring along with Posca Pens.  I also used some glitter, some metallic and some gel pens, along with a normal pencil.
Posted by Sam Squires - A Crafting Niche at 22:01