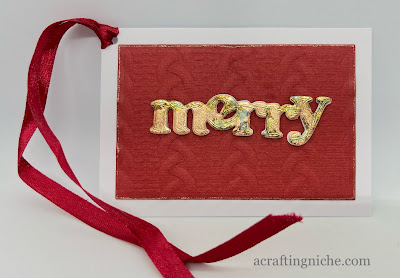 In my craft room, I have a drawer of odds and ends which I feel may come in handy in the future.  I guess I may be a bit of a hoarder?  Anyway, the drawer was struggling to close, so I decided to delve deeper and found some bits to make this Christmas gift tag.

I picked up a piece of red cardstock that at some stage, I had run through the Big Shot in a Sizzix/StampingUp! Cable Knit embossing folder.  So I decided that this would be my base for a couple of tags.

I also found a section of what was originally a piece of double sided sticky paper/card, on one side it looked like I had been experimenting with two different shades of Cosmic Shimmer Gilding Flakes, it's in copper and gold shades.  I decided to run this sheet through the Big Shot, using a "Merry" die from Funky Fossil Designs, it's part of their "Festive Words Die Set". I also ran some white card through using the same die.  I then stuck the two layers together to make a more solid sentiment then mounted it on top of the embossed and layered tag.

It was nice to make a really quick project, especially as it was from bits I had put by for "I might need it in the future use".