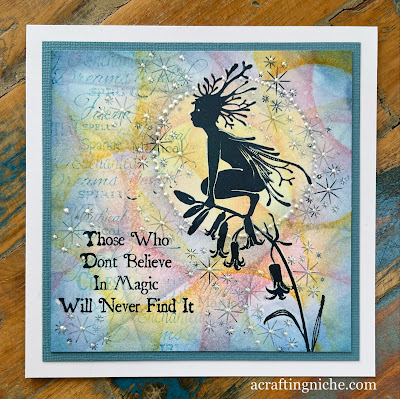 Today I wanted to craft, but my mind wouldn't settle on something to make.  So I turned to the super talented Eileen Godwin for inspiration.  Watching one of her recent "Me To You" Facebook tutorials.  The background of this card, is my take on that tutorial.

To create the background I used four Elements inks:  Russed Orange, Della Blue, Confetti and Sundance with the straight edge of a hill mask and one of the circle/moon masks.

I decided one of the circles would be the moon behind the fairy, so used some white and yellow Pan Pastels to lighten the circle.  I then stamped the Lavinia Stamps "Woodland Sprite" fairy in Versafine Clair "Twilight" ink.

On the left hand side of the card, I used second generation stamping of Versafine Clair "Warm Breeze" to stamp the "Faerie Spells" script. I then used "Twilight" again to stamp the "Believe in magic" sentiment.

I used a white gel pen to add highlights to the fairy, then used a mini star stamp to create a twinkle starry look around the fairy, adding touches of "White Opal" Liquid Pearls to the middle of the stars and to create a circle around the moon.