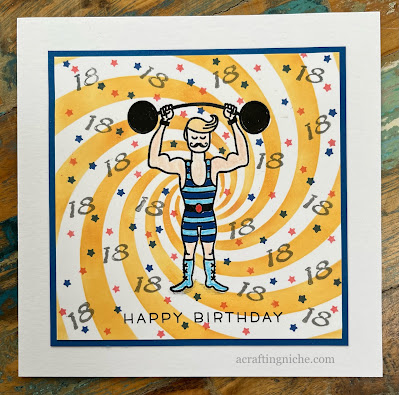 The son of our friends will be 18 soon, so I wanted to make a birthday card for him.

He is also training for a weight lifting competition, so I wanted to make the card themed to this, but it has proven easier said than done.

There is a definite lack of stamps which fit this theme.  In the end, a crafting friend pointed me in the direction of a listing on Etsy for a discontinued stamp set by Avery Elle.  The only problem is that it was in America.  I bit the bullet and purchased it, at an extortionate postage cost and it arrived this week. 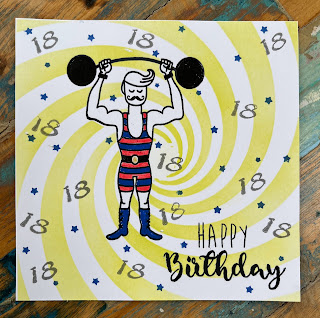 (this is the original draft card)

Now I have the stamp and know the size of it, I need to create the card and I am not in the mood for it at all.  Here are two attempts.  The one without the blue border was my draft, I then made what was to be the card to give, but I don't like it.  It is too busy.  So I need to make another one. I'll leave it for today and see if I have other ideas for it tomorrow.

I've used the Avery Elle stamp for the main figure, with the Visible Image stencil called "Time Tunnel" in the background.