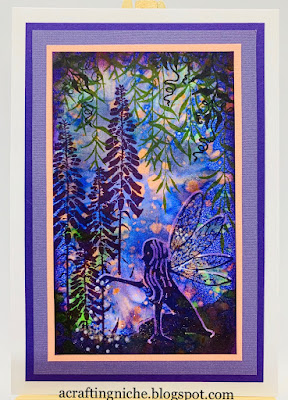 Every month, Lavinia Stamps hold a monthly challenge, where the winning name drawn wins £40 of vouchers to spend on lovely Lavinia goodies.

The theme for the month of June 2019 is:  "A Sprinkling Of Fairy Dust"

This is the third sample I have made as part of the Design Team to promote the challenge.

I made a batch of backgrounds using a gelli plate and Brusho inks a few weeks back.  I've used one of these for the base of this card.  Throughout this card, I have used Lavinia Stamps and Versafine Clair ink to stamp with.

I started by stamping the "Foxgloves" in the shade of Monarch Versafine Clair ink.  I then stamped the fairy called "Dust Silhouette" in the same ink.

I inked the edge of the card and made a landscape for the fairy to sit on in Versafine Clair "Fantasia" ink.  I added touches of silver glitter to the fairy wings and created the dust droplets using Liquid Pearl droplets.  Finally, I gave the card a very light spritz and flicked on some Brusho "SprinkleIT" in "Iridescent Gold"