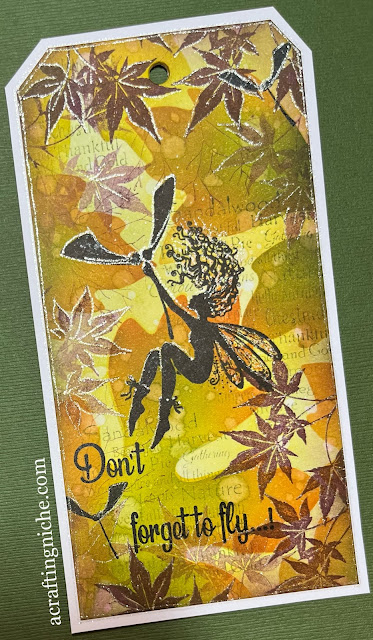 A late night play for me, playing with the Lavinia Stamps "Leaf Sticker Stencil" from set 1 along with a selection of Lavinia Stamps.

On a plain white tag, I covered the surface with "Sundance" Element Ink.

From the Sticker Stencil pack 1 set, I separated the inner and outer leaf and used the square area with a leaf shaped aperture, laying it in multiple places on the tag and colouring in the area with a deeper shade of Sundance Element Ink.  I then added areas of "Russet Orange" and "Olive" Elements Inks to create an autumnal leaf appearance.  I spritzed some water onto my fingers and clapped my hands over the tag to get large splotches of water.  I then removed the surplus water with a piece of kitchen roll and then used the heat gun to fully dry the tag.

Finally, I used a gold shimmer gel pen to add highlights to the fairy and to the maple leaves.  Giving the edges of the tag a slight dusting of "Chiante" Versafine Clair ink.