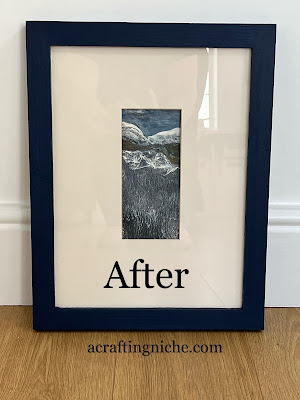 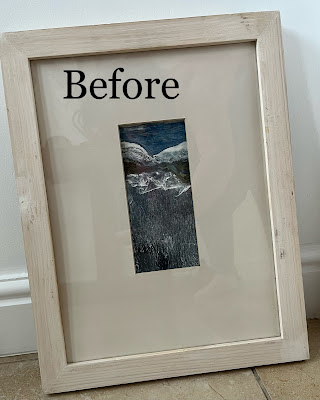 In my spare bedroom, I have all sorts of stuff just waiting to be used. Including an assortment of pictures in frames.  The one above is by a local North Wales artist called Leslie Jones, who has used oil paints on slate to make the image.  It's the snowcapped mountains and is so like some of the Snowdonia mountain range we can see from our village.

Anyway, the wooden white washed frame was looking a bit worse for wear.  There were signs it had been knocked and it was also a little grubby looking, so I decided to paint it.

In my cupboard I had the the left over paint from a previous project where I had painted a small side table in Frenchic "Hornblower" which is a navy blue colour.  So I decided to paint the frame.  I'm really happy with the way it has turned out.  I just need Hubby to hang it on the wall now!